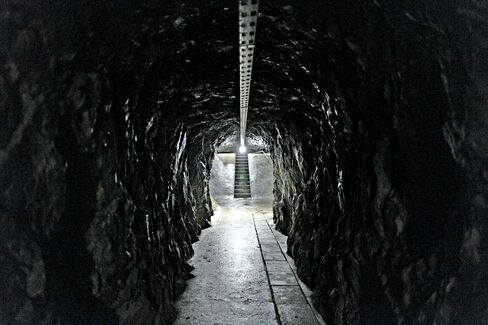 With the global demand for gold growing as a hedge against a volatile economy, high-volume investors around the world have been looking outside of banks for larger, more secure ways to store their precious metals. Since as early as 2008, security companies based in Switzerland have provided their investor clients with high-tech vaults that seem to have come straight out of a spy movie.

Nestled near an airstrip deep within the Swiss Alps, one such vault was built from a military bunker that was once owned and operated by the Swiss armed forces. It is now managed by a private, unnamed security company, and houses one of the largest private stashes of gold in the world. Near the airstrip, an unassuming country lane leads to an entrance built directly into the rocky mountainside, where a guard in a bulletproof vest keeps watch over a small metal door. Behind this door is a tunnel that runs deep into the heart of the mountain, which eventually leads to a 3.5 ton metal vault entrance that can only be opened by a successful password entry, an iris scan and a facial-recognition test. Beyond the vault, an immeasurable amount of gold is stored in an endless series of tunnels and passageways.

The company that owns the vault is as mysterious as its clients, who often want a strict level of privacy when it comes to managing their assets. The owners maintain this with accommodations that are as secret as they are luxurious. Built near the runway is a VIP lounge and a set of apartments where clients can stay for an extended period of time. These units have features such as walls lined with aged wood from Polish barns and floors paved with South African quartzite. Amenities such as bathroom mirrors and TV screens can retract into the unit’s ceilings, walls or counters. While extremely isolated, the vault compound is designed to be a self-contained area where clients can eat and sleep, because according to one of the owners, many clients simply “do not want to leave a paper trail of credit card receipts and passports” at local restaurants and hotels.

While this is still a rare example, demand for such a sophisticated level of security is expected to grow, especially in Switzerland, where security companies like the one described above are often independent from the country’s banking system and its regulatory authority, FINMA. As such, these companies have no obligation to report any suspicious trading activity to Switzerland’s Money Laundering Reporting Office. With the global demand for gold rising, this may be especially important to high-profile international investors, who may want an extra layer of privacy in a state that is already known for its very protective financial confidentiality laws.

Here at Toronto Gold, there’s really nothing to hide about the way we do business. The gold that you sell to us is safely stored inside industrial-grade safes where they await transport to our partners, who later smelt the gold and ship it overseas. It’s really that simple! From regularly publishing our buying prices on our website, to clearly detailing our buying process, we offer a friendly and transparent environment where you never have to worry about what goes on behind vaults or locked doors. Give us a call today at (416) 434-4653 and one of our associates will be glad to further explain our process to you!

As for the luxury apartments, iris scans and facial recognition hardware, we don’t have a need for that… yet.