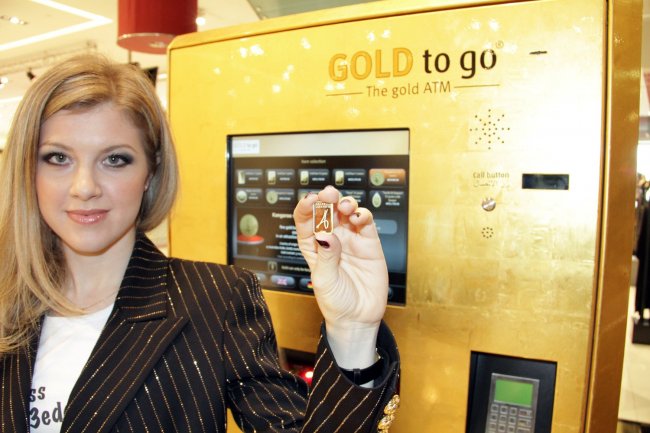 Imagine yourself on vacation, standing inside the sprawling main floor of the Emirates Palace hotel in Abu Dhabi, one of the largest and most luxurious hotels in the world. While waiting to check in, you decide to pass the time by placing an order on a vending machine that’s conveniently placed in a corner of the lavish, gold and marble laden lobby. Looking into the console, you quickly browse at what goods the machine has to offer and make your selection. After pressing the button on your choice, you slip in several bills and wait as the large machine processes your order. After a few seconds, a heavy thud rattles the inside of the dispensary slot, and you reach in, gently pulling out the item you ordered. You inspect it closely before opening it– only it’s not the typical soda can or candy bar that you’re used to. Instead, you have in your hand a small, black box. Tucked neatly inside it is a small, glimmering wafer made entirely of fine gold.

The machine you just used was the GOLD to go™ ATM made by Ex Orientale Lux AG (EOL), a precious metals company based in Germany. While initially involved in facilitating gold trades online, the company soon began to explore new mediums when consumer demand for gold started to rise due to the economic downturn in 2008.

The company first began by working to dispel the popular misconception that gold and precious metals are investments which are too expensive and difficult to obtain by the general public. Inspired by the simple vending machines at airports and hotels, which dispense everyday items such as toiletries and headphones to people who are always on the go, EOL eventually came up with the gold ATM, which offered a fast, convenient and fully automated method for casual investors.

Described as “like an armored vehicle” by the company’s founder, these machines can weigh up to 560 kg and are built to withstand forced break-ins and even small explosives. They dispense up to 10 different products, which include items such as Krugerrands, Canadian Gold Maples and standard or engraved gold bars that range from 1 to 250 grams. A touch-screen interface provides information on the products as well as their real-time pricing, while a built-in scanner can log the user’s passport and identification. Like bank ATMs, they are outfitted with cash and credit card slots, as well as cameras that record every transaction.

The first of the Gold to go™ ATMs were installed in Germany and the United Arab Emirates in 2010. Since then, they have been owned and operated in over a dozen locations worldwide, in countries such as the United States, Switzerland, Peru, Spain and Colombia. With gold becoming a more and more popular form of investment, it’s only a matter of time before these ATMs make their way to Canada. Who knows? Maybe Toronto Gold will be the first to pick one up…