Recently, police from Western Canada has warned of a spike in the trade of counterfeit gold bars in cities such as Winnipeg and Edmonton.

Unlike some of the more obvious fakes out there, the level of detail to these bars are reported to be far more intricate, as they were professionally packaged and have very detailed imitations of designs and corporate logos. Many even come with fake serial numbers and assayer stamps. From the outside, they look virtually identical to their real-life counterparts, but in reality, they only have a thin coating of actual gold, which is plated over an ounce of base metal such as copper or brass. Compared to pure, solid gold, the market value of these metals are practically worthless.

When counterfeit precious metals are packaged this way, it becomes much more difficult to use the more traditional ways of identifying fakes. However, there are still basic ways to protect yourself from being duped when deciding to invest in gold and silver. 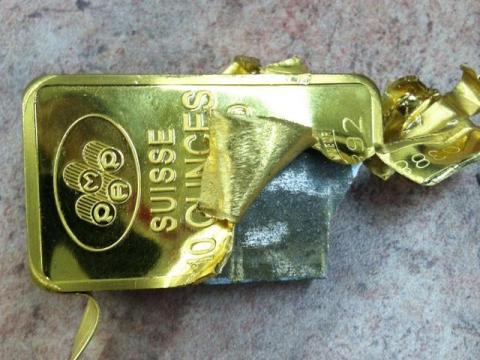 When buying gold or silver bullion, always stick to reputable dealers who have a solid track record of doing good business. Look for sellers who have a good reputation with their clients or have backing from marketplace trust associations such as the Better Business Bureau. Also, be sure to get a good picture of how the seller operates and ask how they verify their products. Well-established retailers would typically use specific gravity testers that would verify the density of their precious metals or spectrometers that will determine their exact composition. These methods would quickly identify plated items and other counterfeit metals.

Unless you can personally vouch for their reputation, try to also avoid private and anonymous sellers from online trading platforms such as eBay, Craigslist or Kijiji. A large majority of counterfeit bars are known to come from these sources. Be very careful on the choice of words that these sellers use to describe their products. The fine print on their pages may subtly describe their items as “plated”, “replicas” or “souvenirs”.

When it’s too good to be true… It usually is

Always be sure to keep a pulse on the current prices of gold and silver. Websites such as Kitco and Bullion Rates provide live pricing on the precious metals market. If a seller is offering you a price that is well below the market value of gold or silver, there is a high chance that he or she is trying to scam you. Bullion dealers are often very careful to sell at a premium to the market rate and would almost never offer deep discounts on precious metals.

When all else fails, consider purchasing bullion directly from an official government mint. In addition to guaranteeing legal tender to the state’s bank notes and coins, some governments provide a similar assurance to their gold and precious metals. For this reason, it would be very unlikely for a government to sell counterfeit metals to its own citizens. For example, the Royal Canadian Mint regularly issues Gold Maple Leaf Coins that have a printed face value of $50, but they are each guaranteed to have one ounce of 99.99% gold within them. Like bank notes, they even have their own security features!

Since they have a printed face value, government bullion can be considered a form of national currency. This usually discourages counterfeiters from making copies of them in a large quantity, as the counterfeiting of currency is a federal offense that carries a far heavier punishment than the counterfeiting of consumer goods. On top of that, the security measures on the bullion would make the forgery process much more difficult.